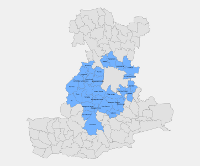 This is going to hurt : secret diaries of a medical resident / Adam Kay

This is going to hurt - Copie

Abstract: Welcome to 97-hour weeks. Welcome to life and death decisions. Welcome to a constant tsunami of bodily fluids. Welcome to earning less than the hospital parking meter. Wave goodbye to your friends and relationships. Welcome to the life of a first-year doctor. Scribbled in secret after endless days, sleepless nights and missed weekends, comedian and former medical resident Adam Kay's This Is Going to Hurt provides a no-holds-barred account of his time on the front lines of medicine. Hilarious, horrifying and heartbreaking by turns, this is everything you wanted to know -- and more than a few things you didn't -- about life on and off the hospital ward. And yes, it may leave a scar. 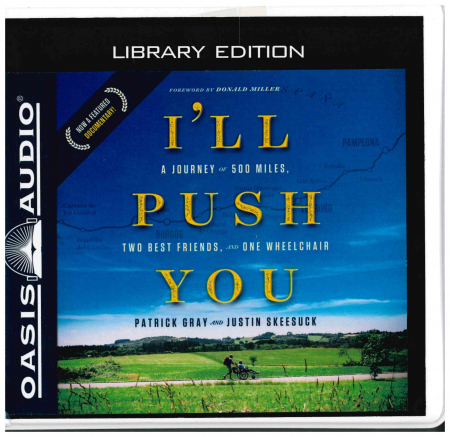 Abstract: Meet Justin and Patrick. Born in the same hospital two days apart, they grew up together, faced life shoulder to shoulder, and were best man in each other’s weddings. It was the way things had always been. It was the way things were always going to be. But then the unexpected struck – Justin was diagnosed with a progressive neuromuscular disease that robbed him of the use of his arms and legs. As Justin transitioned to life lived in a wheelchair, Patrick stayed by his side, and together they refused to give in to despair or physical limitations. So when Justin shared his dream of traveling the famous Camino de Santiago – a spiritual pilgrimage through the mountains and rough terrain of northern Spain – Patrick immediately volunteered to push Justin in his wheelchair. Their six-week, 500-mile trek, whit its physical challenges, host of colorful characters, and deep inner battles, would prove to be the most difficult and important journey either man would ever take. Full of love, humor, and faith, I’ll Push You exemplifies what every friendship is meant to be. This epic travel adventure shows the incredible risk and reward that come with trusting someone else to have your back – no matter what. Discover how friendship can push all limits… and help us become the best versions of ourselves. Abstract: In a profound, funny, and beautifully rendered portrait of a beloved companion, bestselling novelist Dean Koontz remembers the golden retriever who changed his life. A retired service dog, Trixie was three when Dean and his wife, Gerda, welcomed her into their home. She was superbly trained, but her greatest gifts couldn't be taught: her keen intelligence, her innate joy, and an uncanny knack for living in the moment. Whether chasing a tennis ball or protecting those she loved, Trixie gave all she had to everything she did, inspiring Dean and Gerda to trust their instincts and recapture a sense of wonder that will remain with them always. Trixie lived fewer than twelve years; in this wide world, she was a little thing. But in every way that mattered, she lived a big life Abstract: Britt-Marie can’t stand mess. A disorganized cutlery drawer ranks high on her list of unforgivable sins. She is not one to judge others—no matter how ill-mannered, unkempt, or morally suspect they might be. It’s just that sometimes people interpret her helpful suggestions as criticisms, which is certainly not her intention. But hidden inside the socially awkward, fussy busybody is a woman who has more imagination, bigger dreams, and a warmer heart that anyone around her realizes. When Britt-Marie walks out on her cheating husband and has to fend for herself in the miserable backwater town of Borg—of which the kindest thing one can say is that it has a road going through it—she finds work as the caretaker of a soon-to-be demolished recreation center. The fastidious Britt-Marie soon finds herself being drawn into the daily doings of her fellow citizens, an odd assortment of miscreants, drunkards, layabouts. Most alarming of all, she’s given the impossible task of leading the supremely untalented children’s soccer team to victory. In this small town of misfits, can Britt-Marie find a place where she truly belongs? 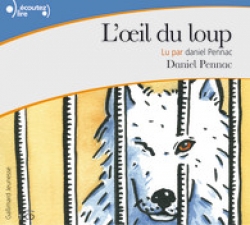 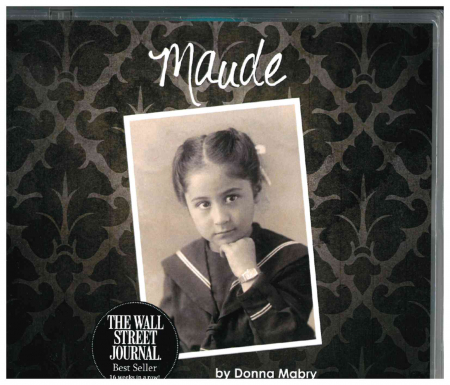 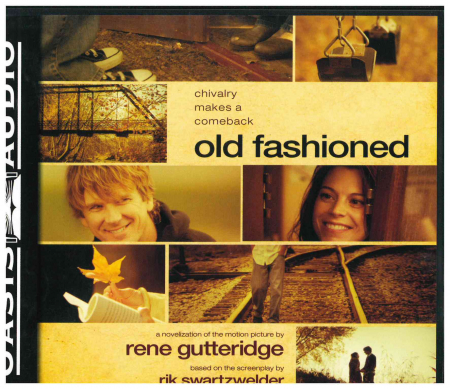 Old fashioned : chivalry makes a comeback / a novelization of the motion picture by Rene Gutteridge ; based on the screenplay by Rik Swartzwelder ; [read by Brooke Heldman] All the light we cannot see Anthony Doerr
0 0 0

All the light we cannot see : a novel / Anthony Doerr ; read by Zach Appelman

All the light we cannot see - Copie

Abstract: Marie-Laure lives in Paris near the Museum of Natural History, where her father works. When she is twelve, the Nazis occupy Paris and father and daughter flee to the walled citadel of Saint-Malo, where Marie-Laure’s reclusive great uncle lives in a tall house by the sea. With them they carry what might be the museum’s most valuable and dangerous jewel. In a mining town in Germany, Werner Pfennig, an orphan, grows up with his younger sister, enchanted by a crude radio they find that brings them news and stories from places they have never seen or imagined. Werner becomes an expert at building and fixing these crucial new instruments and is enlisted to use his talent to track down the resistance. Deftly interweaving the lives of Marie-Laure and Werner, Doerr illuminates the ways, against all odds, people try to be good to one another. Abstract: The international bestselling romantic comedy "bursting with warmth, emotional depth, and...humor," (Entertainment Weekly) featuring the oddly charming, socially challenged genetics professor, Don, as he seeks true love. The art of love is never a science: Meet Don Tillman, a brilliant yet socially inept professor of genetics, who's decided it's time he found a wife. In the orderly, evidence-based manner with which Don approaches all things, he designs the Wife Project to find his perfect partner: a sixteen-page, scientifically valid survey to filter out the drinkers, the smokers, the late arrivers. Rosie Jarman possesses all these qualities. Don easily disqualifies her as a candidate for The Wife Project (even if she is "quite intelligent for a barmaid"). But Don is intrigued by Rosie's own quest to identify her biological father. When an unlikely relationship develops as they collaborate on The Father Project, Don is forced to confront the spontaneous whirlwind that is Rosie―and the realization that, despite your best scientific efforts, you don't find love, it finds you. Arrestingly endearing and entirely unconventional, Graeme Simsion's distinctive debut "navigates the choppy waters of adult relationships, both romantic and platonic, with a fresh take (USA TODAY). "Filled with humor and plenty of heart, The Rosie Project is a delightful reminder that all of us, no matter how we're wired, just want to fit in" (Chicago Tribune). 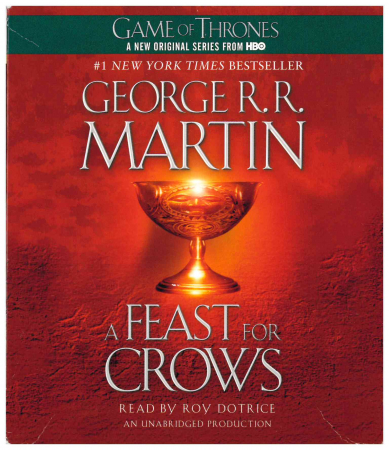 A feast for crows : [a song of ice and fire book four] / George R. R. Martin ; read by Roy Dotrice

A feast for crows - Copie

Abstract: It seems too good to be true. After centuries of bitter strife and fatal treachery, the seven powers dividing the land have decimated one another into an uneasy truce. Or so it appears... With the death of the monstrous King Joffrey, Cersei is ruling as regent in King’s Landing. Robb Stark’s demise has broken the back of the Northern rebels, and his siblings are scattered throughout the kingdom like seeds on barren soil. Few legitimate claims to the once desperately sought Iron Throne still exist—or they are held in hands too weak or too distant to wield them effectively. The war, which raged out of control for so long, has burned itself out. But as in the aftermath of any climactic struggle, it is not long before the survivors, outlaws, renegades, and carrion eaters start to gather, picking over the bones of the dead and fighting for the spoils of the soon-to-be dead. Now in the Seven Kingdoms, as the human crows assemble over a banquet of ashes, daring new plots and dangerous new alliances are formed, while surprising faces—some familiar, others only just appearing—are seen emerging from an ominous twilight of past struggles and chaos to take up the challenges ahead. It is a time when the wise and the ambitious, the deceitful and the strong will acquire the skills, the power, and the magic to survive the stark and terrible times that lie before them. It is a time for nobles and commoners, soldiers and sorcerers, assassins and sages to come together and stake their fortunes... and their lives. For at a feast for crows, many are the guests—but only a few are the survivors.obstacles. Some will fail, others will grow in the strength of darkness. But in a time of rising restlessness, the tides of destiny and politics will lead inevitably to the greatest dance of all. 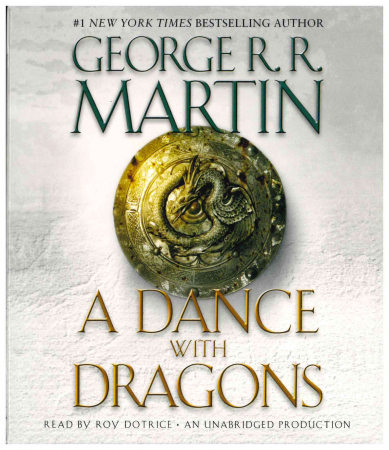 A dance with dragons : [a song of ice and fire book five] / George R. R. Martin ; read by Roy Dotrice

Abstract: In the aftermath of a colossal battle, the future of the Seven Kingdoms hangs in the balance—beset by newly emerging threats from every direction. In the east, Daenerys Targaryen, the last scion of House Targaryen, rules with her three dragons as queen of a city built on dust and death. But Daenerys has thousands of enemies, and many have set out to find her. As they gather, one young man embarks upon his own quest for the queen, with an entirely different goal in mind. Fleeing from Westeros with a price on his head, Tyrion Lannister, too, is making his way to Daenerys. But his newest allies in this quest are not the rag-tag band they seem, and at their heart lies one who could undo Daenerys’s claim to Westeros forever. Meanwhile, to the north lies the mammoth Wall of ice and stone—a structure only as strong as those guarding it. There, Jon Snow, 998th Lord Commander of the Night’s Watch, will face his greatest challenge. For he has powerful foes not only within the Watch but also beyond, in the land of the creatures of ice. From all corners, bitter conflicts reignite, intimate betrayals are perpetrated, and a grand cast of outlaws and priests, soldiers and skinchangers, nobles and slaves, will face seemingly insurmountable obstacles. Some will fail, others will grow in the strength of darkness. But in a time of rising restlessness, the tides of destiny and politics will lead inevitably to the greatest dance of all. The adventures of Sherlock Holmes - Copie 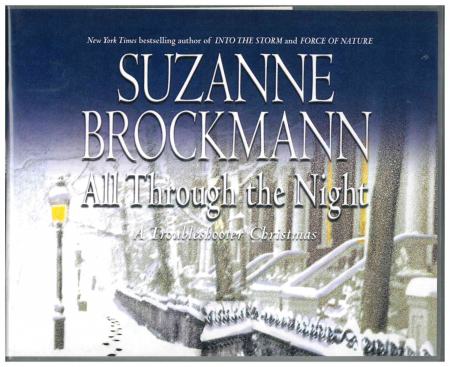 All through the night Suzanne Brockmann
0 0 0

All through the night : a troubleshooter Christmas / Suzanne Brockmann ; [performed by Michael Holland]

All through the night - Copie 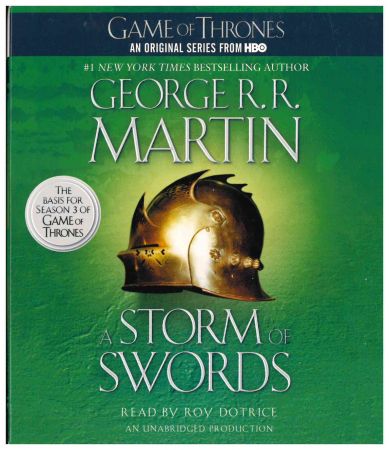 A storm of swords : [a song of ice and fire book three] / George R. R. Martin ; read by Roy Dotrice

A storm of swords - Copie

Abstract: Of the five contenders for power, one is dead, another in disfavor, and still the wars rage as violently as ever, as alliances are made and broken. Joffrey, of House Lannister, sits on the Iron Throne, the uneasy ruler of the land of the Seven Kingdoms. His most bitter rival, Lord Stannis, stands defeated and disgraced, the victim of the jealous sorceress who holds him in her evil thrall. But young Robb, of House Stark, still rules the North from the fortress of Riverrun. Robb plots against his despised Lannister enemies, even as they hold his sister hostage at King’s Landing, the seat of the Iron Throne. Meanwhile, making her way across a blood-drenched continent is the exiled queen, Daenerys, mistress of the only three dragons still left in the world... But as opposing forces maneuver for the final titanic showdown, an army of barbaric wildlings arrives from the outermost line of civilization. In their vanguard is a horde of mythical Others—a supernatural army of the living dead whose animated corpses are unstoppable. As the future of the land hangs in the balance, no one will rest until the Seven Kingdoms have exploded in a veritable storm of swords...